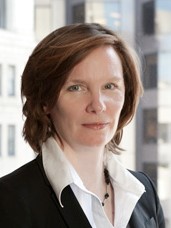 Mary McNamara is a trial and appellate lawyer specializing in white-collar criminal defense and commercial litigation matters. She is AV-rated by Martindale Hubbell, is profiled in Chambers USA America’s Leading Lawyers, where Swanson & McNamara LLP is rated in Band 1, Litigation: White Collar Crime & Government investigations. Mary has been a Northern California Super Lawyer every year since 2004 and was also named Best Lawyers 2012 Lawyer of the Year in White Collar Criminal Defense in San Francisco. In 2022, Mary was named one of Who’s Who Legal: Business Crime Defence best lawyers.

Mary represents both entities and individuals in federal and state courts around the country. She handles a broad range of criminal matters including antitrust, tax fraud, health care fraud, securities fraud, money laundering, trade secret and economic espionage. She also represents clients in an array of regulatory matters, including SEC, FDIC and OCC investigations, and defends clients in civil cases including securities cases and copyright and trade secret cases.

Mary is frequently retained by Fortune 100 companies to represent executives in government investigations by criminal authorities, the SEC, the FDIC and other agencies as well as in civil litigation. Mary regularly advises and represents attorneys in matters involving malpractice, ineffective assistance, and ethical issues.

Mary serves as President of the Bar Association of San Francisco for the year 2022, which is the 150th anniversary of its founding. She is a member of the Legal Committee of the ACLU, Northern California, and is a board member of the Federal Bar Association. She is the Criminal Justice Act (CJA) Panel Attorney District Representative for the Northern District of California and is a member of the national Defender Services Advisory Group to the Defender Services Office of the U.S. Courts. She has served as co-chair of the Lawyer Representatives for the Northern District of California to the Ninth Circuit Judicial Conference, has chaired the Judiciary Committee of the Bar Association of San Francisco and served on the Merit Selection Panel to choose two magistrate judges for the Northern District of California. After law school, Mary served as a law clerk to the Hon. Thomas Gibbs Gee of the United States Court of Appeals for the Fifth Circuit.